APTA CSM 2015 Recap: Use of Mobile Health Technology to Facilitate Long-Term Engagement in Exercise in Persons with Chronic Neurological Conditions

Managing chronic neurological diseases like Multiple Sclerosis and Parkinson’s is not easy, and made even more difficult by conflicting research on how to treat issues. For many years it was unclear whether exercise was good or bad for people with Multiple Sclerosis: some thought that exercise increased the inflammation that is a hallmark of the disease. Recent studies have shown the opposite however and this talk was focused on how an Internet-based intervention could improve exercise self-efficacy.

Exercise, in addition to providing increased mobility, has been shown to actually decrease depression and fatigue for these patients, contradicting past beliefs. Unfortunately, many physicians don’t discuss exercise with these patients, and to go from a sedentary lifestyle to one that includes activity, especially for someone with a chronic neurological issue requires support and supervision.

The problem is widespread as only an estimated 20% of MS patients in the US are engaging in levels of physical activity that will have a positive impact, and studies show a linear decrease in activity from initial diagnosis over the course of the disease with a systematic decline in physical activity every 6 months. 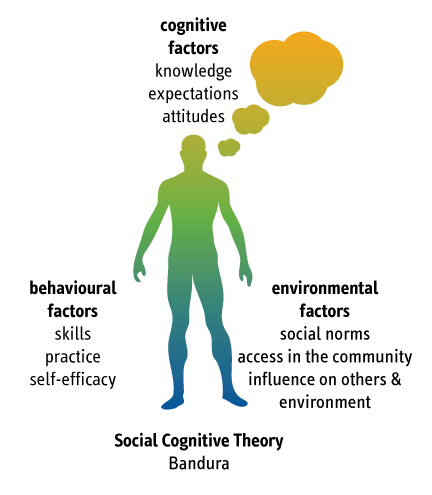 When researcher Robert Motl discovered through a Microsoft-sponsored survey that people with MS were more likely than average to have Internet access (96% had access actually) he decided this would be a great way to educate on the benefits of exercise and attempt to encourage self-sufficiency. He designed an Internet-portal and telemedicine based intervention using Bandura’s techniques of social cognitive theory to effect behavior change.

People learn by observing and by doing and confidence is key for self-efficacy. To accomplish this through an online intervention the website featured personal stories and videos from people who had MS talking about how exercise made a difference for them. People need role models for behavior change and it’s important that those models are similar. The impact of these videos was that people were able to think “If they can do it, so can I.”

Patients were also able to set goals and self-monitor them and communicate in chat rooms with other people with similar situations. After the first year, the website was removed, which may seem strange, but it was done to test whether people would continue with the intervention, which they did. At this point the only support they received 1:1 video chat with a physical therapist to help them check-in and maintain goals.

The main takeaways from this session are that with the right tools and support, which do not have to be expensive, people can change a behavior and maintain self-efficacy. At Wellpepper, we have definitely seen this and hope that more studies like this enable better care through technology and through outside the clinic support.

Note that the other half of this talk explored a yet unpublished study that Boston University is doing with Wellpepper. You can get a sneak preview here, and we’ll be publishing more on this in the future.

Wellpepper is clinically-proven to improve adherence to patient instructions and care plans.

Wellpepper enables healthcare professionals to prescribe digital treatment programs that patients follow outside the clinic using text, mobile, and web interfaces. Wellpepper patients are over 70% engaged with their care plans. Wellpepper’s unique architecture means it can be used to deliver any type of patient interaction across service lines.

“This program has empowered me, lifted my morale, renewed my hope, and given me tools. Thank you for helping me regain my life!”